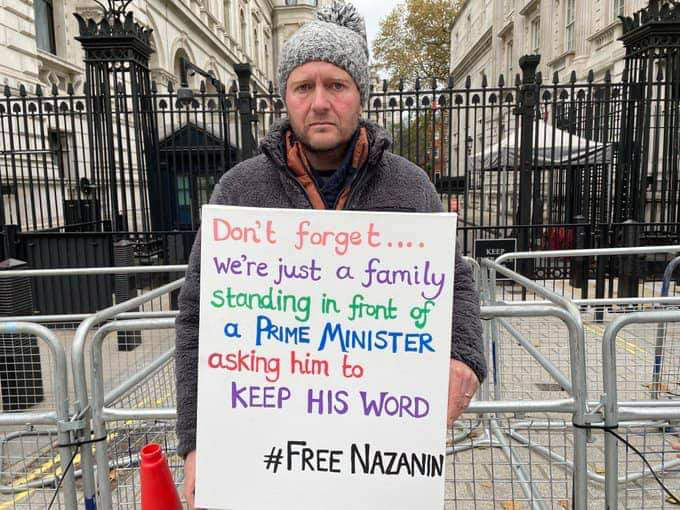 We’re sure that many of you will have seen the horrific case of Nazanin Zaghari-Ratcliffe who has been arbitrarily held in Iran for 5 years. Her husband, Richard, has just ended 3 weeks of hunger strike – camping outside the Foreign Office in the hope that action will be taken to return Nazanin and others back to their families.

The Zaghari-Ratcliffe’s MP, Tulip Siddiq, has secured a debate on this heartbreaking matter in Parliament tomorrow (Tuesday 16th November).

The chair of South Tyneside Green Party, Elaine Francis, has written to our two constituentcy MP’s Emma Lewell-Buck and Kate Osborne on behalf of all our members, urging them to speak out in that debate and help bring Nazanin, Anoosheh and others home without further delay.

As Government delegations from around the world depart from the COP26 climate change conference in Glasgow, I write to you on behalf of all members of South Tyneside Green Party (which covers your constituencies of South Shields and Jarrow) to urge you to not forget Richard Ratcliffe, Nazanin Zaghari-Ratcliffe’s husband, who, until Saturday, was camping outside the Foreign, Commonwealth and Development Office in London.

Richard has just completed 21 days on hunger strike. He is calling for the Prime Minister Boris Johnson to act immediately to secure the release of Nazanin, Anoosheh Ashoori and other British nationals arbitrarily detained in Iran.

As the UK government hosted world leaders in Glasgow, including a delegation from Iran, Richard was sleeping in the cold, and vowed to continue with direct action until steps are taken to secure Nazanin’s release.

Nazanin Zaghari-Ratcliffe and Anoosheh Ashoori are both British Nationals who have been arbitrarily detained in Iran for over five years and four years, respectively.

On 16 October 2021, both Nazanin and Anoosheh were informed by Iranian authorities that they had lost their appeals.

South Tyneside Green Party supports the calls of Amnesty International UK and if you have not already, we are calling on you to urgently do the following:
* Speak at the Westminster Hall debate on Tuesday 16th November and urge Government ministers, in the strongest possible terms, to take action
* Write to the Prime Minister about Nazanin, Anoosheh and other British nationals arbitrarily detained in Iran
* Call on the Foreign Secretary to grant Anoosheh Ashoori’s application for diplomatic protection and to utilise diplomatic protection for both Nazanin and Anoosheh